Yesterday was pure insanity. I’m a born Floridian and I’ve ridden out a few hurricanes in my lifetime, but yesterday scared me. Granted, I lived inland in Florida which made hurricanes a lot less devastating- but still – you can prepare for a hurricane, or just plain get out if you need to. This ridiculous tornado outbreak was not something we could prepare for easily and it was something that a lot of people were taking really seriously and some people were just like, “Those weather people don’t know what their talkin’ about, let’s go fly a kite!” Like, our neighbors had their garage door open and were just hanging out like it was no big deal. And my work? Even after the Mayor urged all employers to let their employees go home at 2pm and school was let out two hours early they were like, “Nah…. you can stay until 4:30!” Yeah, because it’s a really good idea to hold people at work until 30 minutes before the predicted storm of the century is about to hit. We really needed to be over at my In-law’s house in their basement, but by the time Nate and I got home to pack up the bunnies and head out it was too late to be attempting to travel.

Thankfully- the damage here was slim to none. It was as bad as they said it was going to be, but it just didn’t drop on us here in Lexington like it did in surrounding areas. Better safe than sorry. If it had really unleashed on us they way they first thought it would, Nate and I might not be okay today because our house really has no truly safe area in it. Even our downstairs bathroom is connected to an outside wall. So I’m very, very thankful. We spent a little bit of time in the bathroom when we noticed the sky turning a greenish color and the wind picking up. May I just say that being hold up in a tiny bathroom with bunny cages is not pleasant.

It was interesting to see how terribly bad I was at packing in a crisis when I thought we were leaving. I was really trying to be sensible about what was important to have with me the next day if I couldn’t get back to my house or worse yet, if my house no longer stood. I’m not even referring to things that couldn’t be replaced because there was no time for that and there are too many of those things (pictures, heirlooms) – but just clothes and shoes. I packed jeans and a tshirt but then I had to throw in a Modcloth dress, like I was going to be all – “Thank God I have this dress so I can look cute in the disaster aftermath photos!” (???) Haha. I think it was really just about having one thing that I loved if it was all gone tomorrow. Such a strange thing to have to think about.

Please be thinking of the people in the surrounding areas that weren’t as lucky as we were. West Liberty, KY is not too far from here and their entire town is pretty much leveled. The photos are so scary. 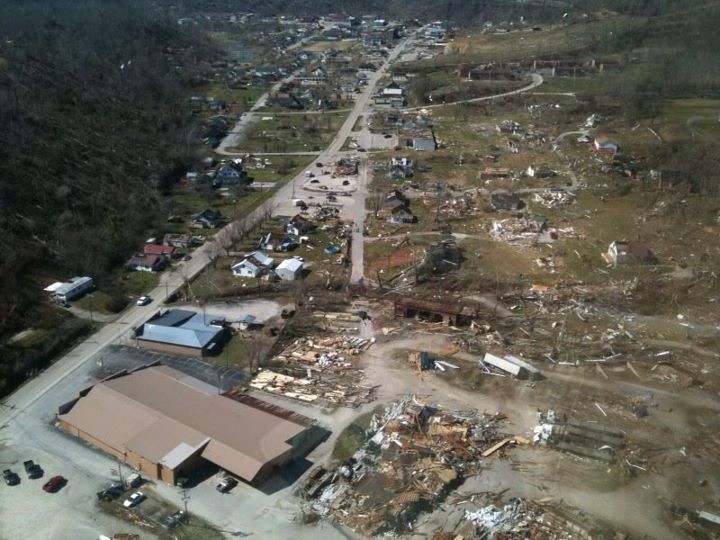