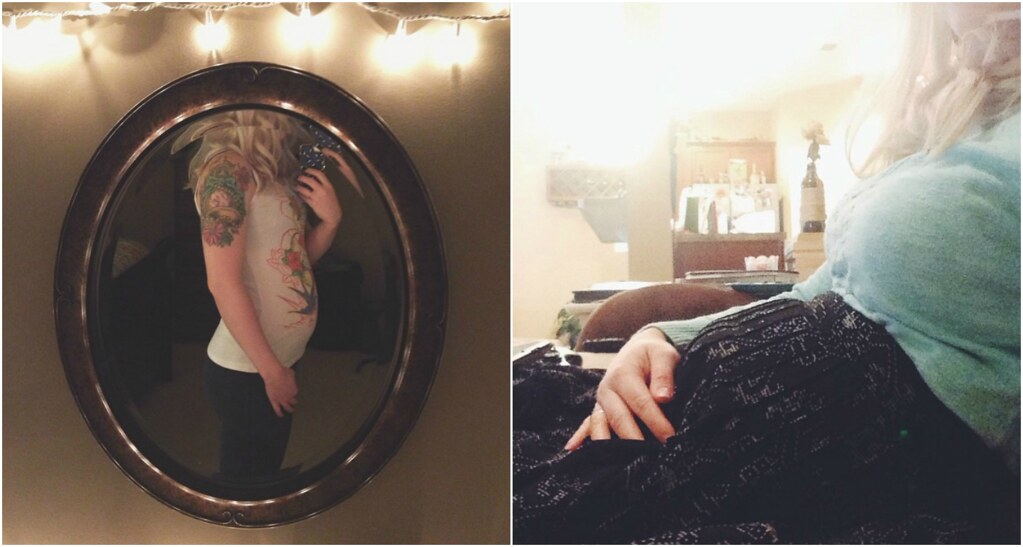 Last Wednesday marked 11 weeks pregnant! I took the photo on the left at 10 weeks and the photo on the right was taken on Wednesday. I’m feeling a little big bigger every day (as to be expected), more so by the way my clothes fit than the way I look in the mirror. This past week was really great because my parents decided to come up and look at houses. (!!!) I was really nice to have them here. It was kind of a last minute trip so I worked most of the week but I did manage to take Friday off to spend with them. It’s exciting to think of having them here all of the time! The past few years have been so hectic with trying to get down to Florida anytime I could, though I do love those little trips “home”. It would be a lot easier to have them here though once the baby arrives! And now – on to my random thoughts!

Flutters: On Friday night I drank a giant glass of orange juice while laying on the couch. About 15 minutes later I felt little pop-corn like feelings in my stomach. It almost tickled.. from the inside. I have no idea how else to describe it! I thought for sure that I was being crazy, so I googled it. To my surprise there were a lot of other ladies who described exactly what I felt and confirmed that it’s definitely possible to feel the baby this early. Thinking back on it, I definitely think they were little hiccups with how they were timed. I’ve drank orange juice again almost every night to try and see if it will happen again, but no such luck! Now I’m just over here impatiently waiting for more hiccups!

Maternity Clothes: I really had this idea that I wouldn’t need maternity clothes for months, but as it turns out – wrong. Some of my clothes still fit alright but they have just started to feel increasingly uncomfortable. On Friday I decided it was time to check out the Motherhood maternity store in the mall just to see what they might have that I liked. I found a really cute dress that my Mom decided I had to have, so she bought it for me. Thanks Mom! It wasn’t too pricey – but a lot of the clothes just weren’t my style and were more than what I would normally pay so I passed on some of the basics I was hoping to find that day. On Saturday I went shopping with Kristie. We ended up at Clothes Mentor and I really hit the jackpot in there! I found 4 tops and a pair of really cute maternity jeans all for $43! I’ve side-eyed most of the maternity jeans I’ve seen – all pretty awful looking and expensive. So, finding a cute pair of skinny maternity jeans for $13 felt like winning the lottery. I feel like this is the best time of year to be pregnant. I’m just going to live in stretchy pants, dresses, and comfy sweaters.

The Waiting Game: The anticipation of finding out if this baby is a boy or a girl is making me a little nuts. I want to look at clothes, I want to look at nursery ideas – and I don’t want to look at anymore gender neutral stuff. I’m trying to just avoid looking at baby stuff for now because it makes me want to know even more!

Names: I’m completely shocked by this because I’m the most indecisive person you will ever meet, but we’ve picked out our names! We have a girl and a boy name ready! There’s a long way to go so maybe we will change our minds but I’m pretty set on them. 🙂 I have a feeling we’ll keep them a secret from most everyone (except family/close friends) until the baby is born.

Symptoms: I’m still feeling pretty great. My tiredness has subsided a little bit since starting on the Vitamin D. The only really irritating symptom I have is that I will not be able to stop myself from throwing up if I gag. Like, if I accidentally gag myself brushing my teeth – it’s OVER. The good thing is that it’s only ever happened in the morning and there’s never anything in my stomach. But it’s still awful and it still takes a lot of energy out of me to dry heave for 15 minutes. I’ll take it though. I know I’m very blessed to have bypassed the horrible nausea of the first trimester.