I mentioned in my post at 16 weeks that Nate and I were going to be finding out the baby’s gender earlier than we originally thought! I just couldn’t wait until February when I knew it was possible to find out now. I made the appointment on Wednesday and counted down the days until Saturday at 3PM when we would finally know! On Saturday I woke up at 6:30AM unable to sleep another minute. Somewhat because I was excited and a lot because I’ve been battling a horrible cold/cough. I didn’t mind getting up though to go downstairs and snuggle under a blanket by the Christmas tree for a while. I fell back asleep for a bit eventually and by the time I woke up it was time to get ready for the appointment!

When we got there they promptly took us back at 3PM. My Mother-in-law, Sister in-law Erin, and our two nieces were all there for the party and we Face-Timed my parents so they could see as well! Nate and I sat there in awe when we saw our sweet baby on the big screen! Kicking around, moving arms, legs – dancing up a storm. It was so fascinating to think back on my previous ultrasound just 8 weeks before – he just looked like a tiny peanut! The ultrasound tech took pictures of his profile, feet, hands, and tried with all she could to get a clear shot of whether or not baby was a boy or girl. She finally had to ask us to step out and wait while she took another appointment and in the mean time I was to walk around and do whatever I could to get the baby to move around a bit. I started to feel like we would probably have to come back in a week or so. Erin went and got me a sprite to drink, I jumped around a little (I really did), I peed around 15 times, and then it was our turn again. She called us back, I laid down, and BAM – plain as day, it was a BOY!!! 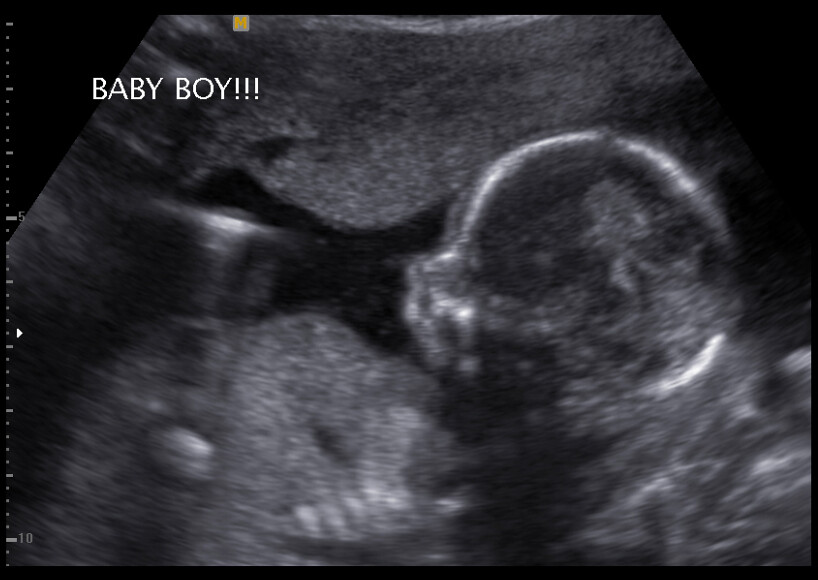 THE most ADORABLE baby profile in the whole world!!<3333
I couldn’t believe it! So many people (including Nate) thought it was a girl and they had managed to convince me too! I’ve only had two dreams about the baby and in both it was definitely a boy – but I ignored my gut! Whenever someone asked me what I wanted I was honest about not really caring either way but that also, being a girly girl and all – I wouldn’t mind having a girl. ;] The second I found it was a boy though, my brain switched gears. I immediately started looking up all of the cute boy clothes and nurseries on Pinterest. I’ve already picked my nursery colors and pinned a million cute baby boy outfits and photos. Oh man, I cannot wait!

It has been the cutest thing watching Nate get excited for this baby. I know he would have been the same way with a girl, but I can just see it in his eyes that he’s so proud that he’s going to have a son. I think one of my absolute favorite things about this whole pregnancy will be watching him. He tells us both, individually, every morning that he loves us. He text messages me to tell me what a great mom I’m going to be. He tells me what he’s looking forward to doing with the baby. It melts my heart.

Today I am 17 weeks! Things are mostly the same as they have been. I have been sick for about a week and it’s become clear that it isn’t going away. Thankfully my doctor is going to call something in for me that I can take and hopefully I’ll start to feel better. The ultrasound showed the placenta is anterior, meaning that it’s like a cushion between me and baby. So feeling him move will be more difficult. It could change though! I had resigned to thinking that I wouldn’t feel him at all for quite a few more weeks because of that – but I decided to have a little bit of sweet tea this morning instead of coffee and – BAM. Dancing baby. There was no mistaking that feeling! This baby digs the sweet tea. So .. now I’m wondering if the anterior placenta will really matter at all? I have no idea.