(photo credit: here, here, + here)
I’ve been thinking a lot about my “26 Before 27” list lately and what should make the final cut. In case you aren’t sure of what I’m talking about – this is simply a list of 26 things I want to do before I turn 27. Twenty-seven sounds so much older than twenty-six, in my mind. Maybe it’s because I always thought to myself that I’d be around twenty-seven when I had kids, because that’s close to how old my mom was when she had me and I’d totally have all of the details of my “adult life” mapped out by then. *blink, blink* Yeah, right! Does anyone ever “feel” like an adult, completely and totally in control? Twenty-seven used to sound so FAR in the future and now it’s almost here, ya know? I assumed I’d have done a lot of things by now that I haven’t. I tend to make unattainable mini goals that keep me from actually trying/doing anything. For example, I’ve wanted to learn the art of aerial silks for quite a while. I saw a fellow blogger posting photos on Instagram and I became mesmerized with the idea of it. Last night I discovered a Groupon for a place here in Lexington offering classes. I almost immediately hit “Buy” – but then I started to think about it a little more.

The wheels turned in my mind: I have almost no upper body strength – I’m going to be horrible at this! OR what if I fall in love with it after a few classes? It will be EXPENSIVE if I want to continue doing it after my 5 classes are over. And then I realized that this is the reason why I don’t do anything for myself. I overanalyze everything. I take things too seriously. I ‘what if’ everything to the point that I can’t decide on anything, I get frustrated, and say NEVER MIND. I drive Nate bonkers with this kind of stuff because he simply decides to do things and then he does them. So after telling him about it and receiving some encouraging words I decided I have to try it. There is no doubt that it will be difficult. I’m in no way delusional about how this will start out at first – frustrating and very probably, painful. Haha. But I can stick with it for at least 5 classes! I’m hoping a friend will go with me. Though I’m pretty sure she’ll be a natural with her history as a dancer/gymnast and I’ll be over there flopping around and trying to hang on. ;]

So, this is the first addition to my “26 Before 27” list and I’m well on my way to achieving it. I think this will be a fun and hilarious journey to take you guys along with me on so stay tuned! In the mean time… I’m going to go do some pull ups and attempt to delude myself into thinking that I’m going to eventually quit my day job and join the circus. The circus without clowns… because.. you know.. Nate hates clowns.

Have you ever tried anything like this? I’d love to hear all about it!! 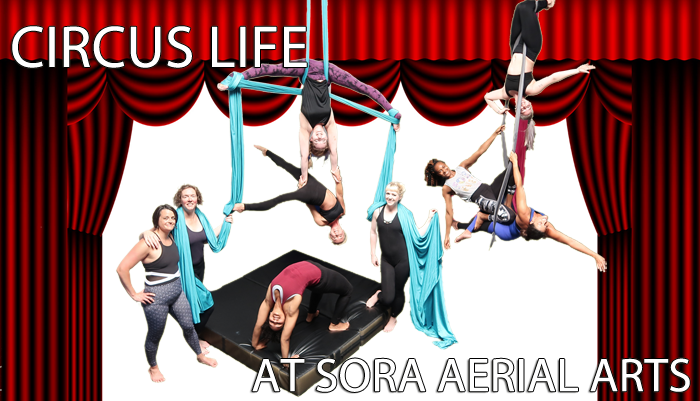